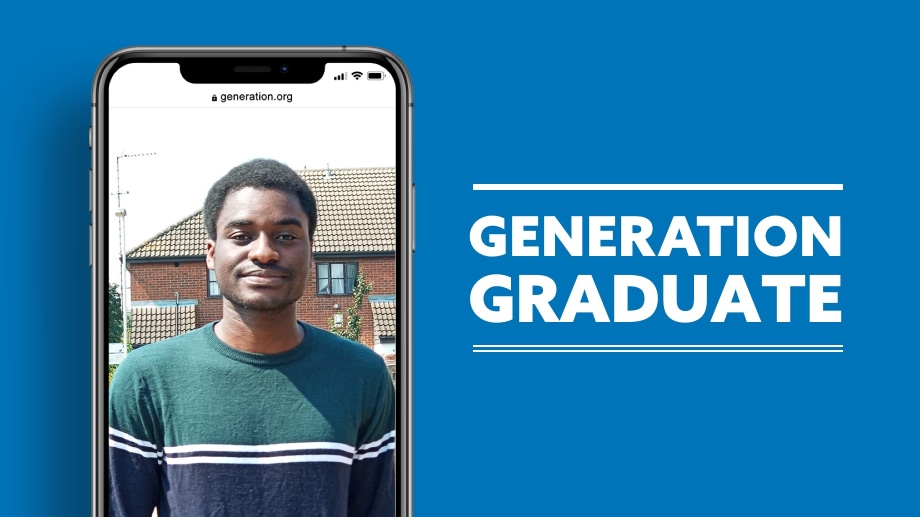 Julius graduated from the Tech Talent Accelerator program in the UK. After arriving in the UK from Ghana, he was unable to afford the high university costs, so Julius worked in an Amazon sorting facility by day and taught himself some JavaScript and Python coding by night.

He eventually won a scholarship from Intel to participate in a group project at the intersection of AI and healthcare. But when he spoke, people kept asking him to repeat himself, and so he lost confidence in his communication and began to mumble. Thus, even with this unique training experience, he lacked the confidence to apply for positions in the tech sector.

During Generation, when his peers began to ask him questions about coding and for general tech advice, Julius discovered he was very approachable, and really good at explaining these topics clearly. He began to realise this natural talent and his confidence came back that he was fully understood. The mindset training modules gave him a totally new perspective on the job application process, and now he approaches every interview with quiet confidence and determination.

In addition to learning JavaScript and building a final project around an API, Julius’ favourite part of the Generation program was the people. He knows that his classmates will become his future professional peers and support system. Additionally, he found that 65% of the questions asked during his interviews at Facebook and BP were covered in the Generation program. He knew how to demonstrate his knowledge of code as well as his new organisational, prioritisation, and communication skills. Plus, he felt very comfortable interviewing remotely after gaining tips from the interview support workshops towards the end of the Generation course.

Julius received a job offer from BP and for the first time in a while, feels optimistic about what the future will bring.

Students celebrate graduation around the world